The process of combustion, i.e. the process in which chemical components at stongly exothermal (heat releasing) conditions are oxidized, in most technically relevant applications is used to convert energy but also to convert mass (e.g. to convert pollutants or poisonous matters) or a combination of both.

Beneath the (wanted) goals, combustion also plays an unwanted role in the context of emission of pollutants (e.g nitrogen oxides, carbon monoxide, carbon dioxide, sulfur dioxide, ultra fine particlates) and the environmentally harmful release of heat. Additionally, there is another area of concern based on the fact that useable fossil fuels are limited and the widely accepted fact that combustion products (especially CO2) negatively influence the world climate: therefore research on the use of alternative, renewable fuels have come into focus in the last decades.

Research in the field of combustion technology starts with the basic physico-chemical processes:

A simple example of the effect of the intensity of these individual processes on the overall phenomenon "flame" can be seen in the so-called laminar premixed flame. Since the components fuel and air are already mixed in before, transport processes of the energy have the main effect in this case:

The picture shows laminar methane-air flames burning with different pre-mixed ratios of fuel (methane) to air. A significant change in length can be observed, although the amount of premixed medium supplied remains constant. This is equivalent to the fact that the conversion process takes place at different speeds in each case.

In addition to the flames shown above, which form above a nozzle and burn stably there, other configurations are also known in which a stationary mode of operation, i.e. stable at one location, is possible, such as the laminar countercurrent premixing flames outlined below:

Here two premixed fuel/air jets are directed against each other (in the picture: from above and below), so that a flow field is created which forms a stagnation point (no velocity) on the axis and where only a radial outflow of the fluid is possible (in the picture this is the horizontal direction). If the premixed gases are ignited on both sides, two flames are formed symmetrically in a strongly diverging flow field. This flow divergence is also the reason for the interest in this configuration: It is possible here to specifically influence such a flow divergence or the stretching rate of the flow by the supplied volume flow and to investigate the behaviour of the flame under this stretching. This is particularly important in connection with the description of flames in turbulent flows, since high stretching rates are always to be expected there.

In contrast to the premixed flames already described, non-premixed flames are usually used in technical systems for safety reasons. Such a flame is created when the fuel and the oxidant (usually air) are not already mixed in front of the combustion chamber, but the chemical reaction and the mixing process take place at the same place. Since the chemical reaction can usually take place much faster than the mixing process allows, such flames are described as mixture-controlled. Thus, the rate of the mixing process determines the rate of the subsequent chemical turnover. Since in laminar systems the mixing is provided by the molecular transport of the respective substances -that is, by the process of diffusion-, such flames are also called diffusion flames. Examples of laminar diffusion flames are candle flames or the flame that occurs in a counterstatic diffusion burner. In the latter, scientifically controlled conditions can be produced by controlling the supplied volume flows of fuel and air.

In technical processes, unlike the above example, comparatively high throughputs and the resulting high conversion rates are required. This requires large dimensions and flow velocities. However, such flows are no longer uniform and laminar but irregular due to flow instabilities and they change very rapidly over time. Such a flow form is called turbulent. It is characterized by the fact that it can be quite stationary in the time average, whereby the momentary deviation is very complicated and only very complex to describe. If only the mean value of the flow is considered, this statistical deviation of the flow movement has the effect of an additional (turbulent) diffusion, which in combustion processes leads to an increased mixing rate and thus, as a rule, also to higher conversion rates.

For the practical application this means: Findings from these basic processes lead to investigations concerning the fluid mechanical realization of the mixing process, which subsequently culminates in an improved technical design of burner and combustion chamber as well as the macroscopically relevant process parameters.

For the design of technical processes it is therefore necessary to be able to make statements about the effects of changes in plant components and process parameters on the quality and quantity of the desired product. In order to be able to make such statements, extensive and very cost-intensive experiments are usually carried out on a laboratory and pilot plant scale. 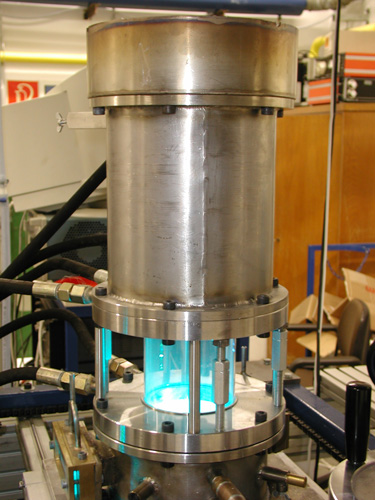 With regard to the reduction of pollutant emissions, investigations are mainly carried out, partly on plants in operation, but mainly on model plants on a pilot plant scale. As a result, some reduction strategies for pollutant emissions have already been developed in recent decades. However, a further insight into the detailed processes of pollutant formation is at least extremely difficult to realise due to the limitations of diagnostic measurement techniques and is also very complex and cost-intensive. In particular for the investigation of combustion processes, the experimental effort is extremely high due to the very high temperatures that occur (1000-2000°C).

In addition to experimental investigations, however, predictions with computer-aided numerical simulations are being used more and more frequently in order to design plants as optimally as possible. With numerical calculation methods, systems of equations that cannot be solved directly (analytically) can be calculated at least approximately by applying a mathematical algorithm. This provides a relatively simple and cost-effective possibility to vary burner and combustion chamber geometry and thus to investigate the influence of design measures in advance and to gain direct insight into detailed processes, such as the turbulence structure or turbulent fluctuation of influencing variables of the formation process.

However, the prediction quality of such simulations is still not satisfactory due to the large number of physical-chemical sub-processes involved and their complicated interaction. It depends strongly on the quality of the model conceptions for the individual processes and above all also on the models, which describe their interaction. The development of such application-relevant models is therefore a main focus of the investigations carried out at this institute.